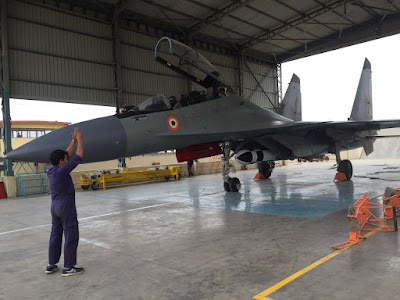 The first carriage flight of Su-30 MKI aircraft with BrahMos missile was successfully undertaken at HAL Airport in Nashik, with the integration making the fighter aircraft a lethal weapon delivery platform for the Indian Air Force. It is the first time in the world that such a heavyweight (2,500 kg) supersonic cruise missile has been integrated on a fighter aircraft, according to BrahMos Aerospace Pvt Ltd (BAPL) Chief Executive Officer and Managing Director Sudhir Kumar Mishra.

The aircraft was in the air for 45 minutes and was flown by Wing Commander Prashant Nair and Wg Cdr MS Raju, both flight test crew of the Aircraft and Systems Testing Establishment, HAL said in a release in Bengaluru. Around 40 Su-30 MKI aircraft are expected to be modified. The maiden flight will be followed by a series of test flights and complete evaluation and certification of BrahMos missile on Su30 MKI aircraft, HAL Chairman and Managing Director T Suvarna Raju said on the occasion.

So let’s do:
1. Name the Missile, Which was successfully undertaken at HAL Airport in Nashik, Recently?