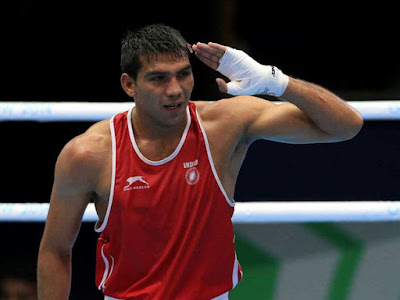 Indian star boxers Manoj Kumar and Vikas Krishan have qualified for the Rio 2016 Olympics scheduled to be held in August 2016 in Rio de Janerio, Brazil. Manoj Kumar booked Olympic berth after advancing in the quarterfinal bout against Tajikistan’s Rakhimov Shakvakatdzhon in the AIBA World Olympic qualification event in Baku, Azerbaijan.
Later, Asian Games champion Vikas Krishan also qualified for the Olympics after defeating South Korea’s Lee Dongyun 3-0 in the 75kg category in the quarter-finals. With this total three Indian boxers have assured of Olympic berths. Shiva Thapa was the first Indian boxer to qualify for Rio Olympics. He had made the cut in the 56-kilogram category for Rio during the Asian Qualifiers in March 2016.

So let’s do:
1. Name the person, who have qualified for the Rio 2016 Olympics scheduled to be held in August 2016 in Rio de Janerio?