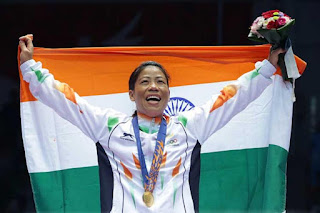 Celebrated Indian boxer M C Mary Kom is all set to add another honour to her glittering career when she receives the ‘Legends Award’ from the International Boxing Association (AIBA) on its 70th anniversary on December 20.

At present, the Olympian and a five-time world champion is a Rajya Sabha MP. President Pranab Mukherjee nominated her as a member of the Upper House of the Indian Parliament in April 2016. Mary Kom is also a multiple-time Asian champion and was named an AIBA brand ambassador during the 2016 AIBA Women’s World Boxing Championships.
Source – The Hindu