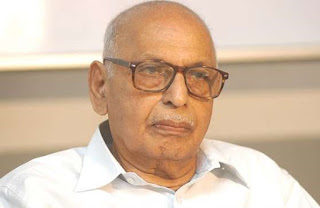 Mathrubhumi former editor K K Sreedharan Nair passed away. He was 86. The end came at a private hospital in Kochi. He started his carrer in Journalism as a sub-editor in Mathrubhumi in 1953.
Beginning his journalism career as a sub-editor in Mathrubhumi in 1953, Nair had an illustrious career in various capacities including Chief Sub-Editor, News Editor and Deputy Editor. Nair, who was appointed Editor of the daily in 1990, continued in the post for 10 years.

So let’s do:
1. Name the Mathrubhumi former editor, who has passed away recently?