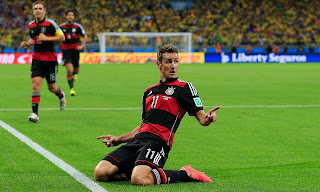 Miroslav Klose, the top scorer in World Cup history, is ending his playing career and will join Joachim Löw’s coaching staff as he studies for his pro licence, the German football association (DFB) have confirmed.
The 38-year-old retired from international football after winning the World Cup with Germany in 2014, scoring twice to bring his total goal tally from four tournaments to 16. He is also Germany’s record scorer with 71 goals.