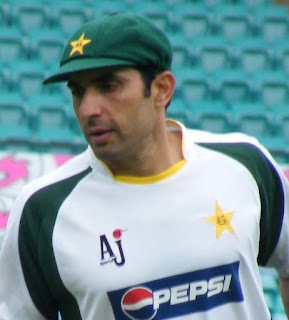 Misbah-ul-Haq, Pakistani cricketer and the current Test captain of the national cricket team has scored 110 against England at Lord’s. With this, the 42 years and 47 days old cricketer became the oldest captain to score Test hundred.

Misbah-ul-Haq is a Pakistani cricketer and the current Test captain of the Pakistan national cricket team, and was also the One Day International (ODI) captain until his retirement from ODI cricket after the 2015 Cricket World Cup. He is a middle-order batsman best known for his composure with the bat whilst also having the ability to be an aggressive big shot player when required. He is the top scorer in ODI cricket among those players who haven’t scored a century in ODI. Misbah holds the record of the fastest test half century.