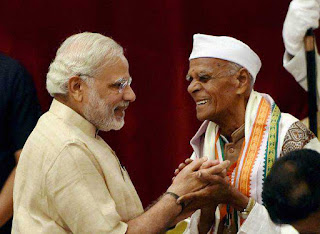 Prime Minister Narendra Modi has announced 20% hike in pension of freedom fighters. Those who are receiving Rs.25,000 will now get Rs.30,000, PM Modi said in his address to nation from Red Fort on 70th Independence Day. He also announced that museums would be established in different states.


Addressing the nation on the 70th Independence Day from the Red Fort, he said: “The government is taking steps to increase the pension for freedom fighters by 20%. This is a small act of reverence on my behalf.” The Prime Minister said the role of some people in the freedom struggle is discussed “more than needed”, while the contribution of tribals has not been highlighted as much. The government will built museums in several states to glorify the role of “lesser-known” tribal freedom fighters among future generations.
So let’s do:
1. Prime Minister Narendra  Modi announces ____ hike in freedom fighters’ pension?