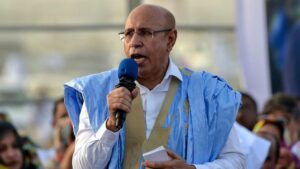 The election was the first in Mauritania, since independence from France in 1960.

TikTok choses Oracle as its technology partner for its US operations