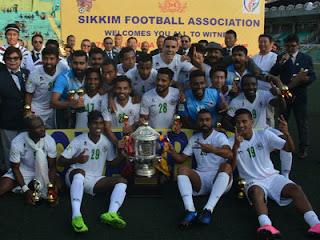 Maidan heavyweights Mohun Bagan has won the 37th All India Governor’s Gold Cup football tournament for the 10th time by defeating Partha Chakra by a narrow 1-0 margin.
In the final match played at Paljor Stadium (Gangtok),  Mohun Bagan’s striker GA Kramah scored the lone goal in the seventh minute. Chief Minister of Sikkim Pawan Kumar Chamling attended the final and gave away trophies and cash prize to winners and the runner-up.

Must Do Takeaways from the above News:

TO READ THIS NEWS IN HINDI