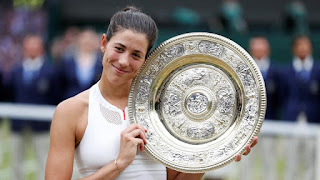 Garbine Muguruza of Spain came out with the spectacular performance as she defeated seven-time Grand Slam Champion Venus Williams in straight sets to clinch her maiden Wimbledon title.
The 14th-seeded Spaniard defeated Williams 7-5, 6-0 in what eventually turned out to be a one-sided contest lasting one hour and 23 minutes on the Centre court.
Source- The Times of India
Find More Sports News
×