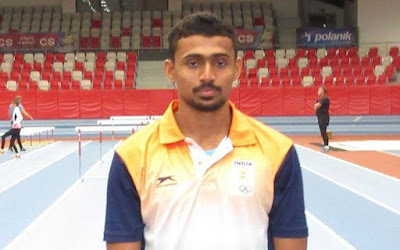 Muhammed Anas serving in the Indian Navy has qualified for the Rio Olympics in the 400 meters run. Anas, who broke the national record twice, is the third male athlete in the history of Indian athletics after the legendary Milkha Singh and K M Binu to have qualified for a  400-metre event in the Olympics.
Anas was scouted by the Navy at the national Games held at Kerala in Feb 2015. He joined Indian Navy on 07 May 2015 and was placed under the Navy coach T G Ajesh, a former International athlete. He won silver medal in 400 meter in his maiden Inter Services Championship held at Hyderabad in July 2015, and also a silver medal in his first Senior National Athletics Championship at Kolkata in Sep 2015.

So let’s do:
1. Name the athlete, who has won qualified for the Rio Olympics in the 400 meters run?