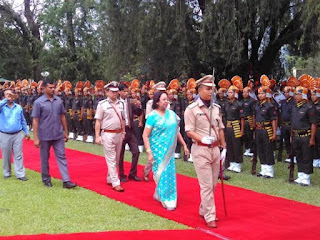 Former Union Minister Najma Heptulla was sworn-in as the governor of Manipur. Heptulla, the 18th governor of the state, replaced Shanmuganathan who was holding the dual charge of Governor of Manipur and Meghalaya. The swearing in ceremony was attended by CM Okram Ibobi among others.
Heptullah’s two-year stint as minister for minority affairs was peppered with occasional controversial statements like when she questioned the logic of categorising Muslims as minorities or talked about the people of Hindustan being Hindus.
So let’s do:
1. Name the person, who was sworn-in as the governor of Manipur?