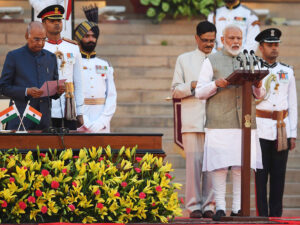 National Democratic Alliance leader Narendra Modi was sworn in as Prime Minister for the second consecutive term. President Ram Nath Kovind administered the oath of Office and Secrecy to him and a team of 57 ministers at a glittering ceremony on the forecourts of the Rashtrapati Bhawan, New Delhi.

Important Takeaways for RRB NTPC/IBPS RRB Mains-
1. After Jawaharlal Nehru and Indira Gandhi, Narendra Modi is the third prime minister of the country who has been able to retain power for a second term with full majority in Lok Sabha.
2. The NDA together has a strength of 353 MPs in the 543-member Lok Sabha out of which the BJP has a majority of 303 MPs.