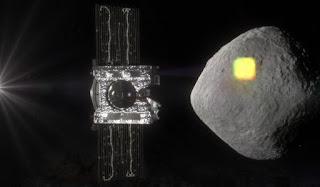 NASA is set to launch a new spacecraft in September that will travel to a near-Earth asteroid known as Bennu and bring back a sample of surface material which may contain building blocks of life.
To identify the regions in which the building blocks of life may be found, the Origins, Spectral Interpretation, Resource Identification, Security-Regolith Explorer (OSIRIS-REx) team equipped the spacecraft with an instrument that will measure the spectral signatures of Bennu’s mineralogical and molecular components. Known as OVIRS (short for the OSIRIS-REx Visible and Infrared Spectrometer), the instrument will measure visible and near-infrared light reflected and emitted from the asteroid and split the light into its component wavelengths, much like a prism that splits sunlight into a rainbow.

So let’s do:
1. Name the space agency, Which has set to launch spacecraft to near-Earth asteroid?