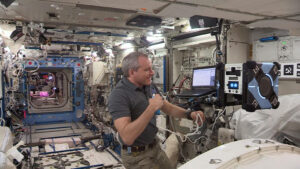 National Aeronautics and Space Administration’s robot named Bumble became the first Astrobee robot to fly under its own power in space.

Astrobee is a free-flying robot system that will help researchers test new technologies in zero gravity and perform routine work alongside astronauts aboard the International Space Station.

Astrobee robots can move in any direction and turn on any axis in space.