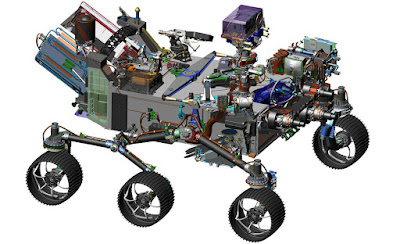 National Aeronautics and Space Administration (NASA) is ready to proceed with the final design and construction of its next Mars rover, targeted to launch in the year 2020, which will probe for evidence of past life on the red planet and help prepare for future manned missions. Set to arrive on the planet in February 2021, the rover will study a region of Mars where the ancient environment may have been favourable for microbial life.
It will collect samples of soil and rock and cache them on the surface for potential return to Earth by a future mission. The mission is the first step in a potential multi ­mission campaign to return carefully selected and sealed samples of Martian rocks and soil to Earth. It results important milestone in NASA’s Journey to Mars to find whether life has ever existed on Mars, and to advance our goal of sending humans to the Red Planet.

So let’s do:
1. Name the space agency, which is ready to proceed with the final design and construction of its next Mars rover?