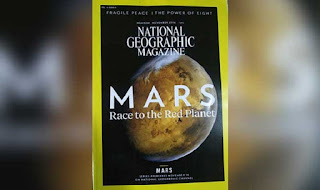 An image of the planet Mars taken by ISRO’s Mars-orbiting spacecraft Mangalyaan has found a place on the cover of the November edition of the National Geographic magazine. The spacecraft’s launch had completed three years on November 5. The mission, which had cost Rs. 450 crore, was made to last six months but has now survived for three years.
Source – Business Standard