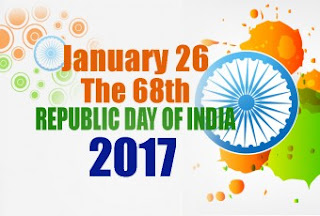 India celebrates its 68th Republic Day today (26th January 2017). On January 26, 1950, the Constitution of India came into force, and Republic Day is celebrated to honour that day. On this day in 1950, the first President of India, Dr Rajendra Prasad took the oath. President Pranab Mukherjee has started the ceremony by hoisting the Indian flag, following which the Republic Day Parade from Rajpath. The parade starts from Rajpath and ends at Red Fort in Delhi. Every year on Republic Day, India invites a visiting head of state, who is the state guest of honour (chief guest) for the ceremony. This year’s guest of honour is the Crown Prince of Abu Dhabi Mohammed bin Zayed Al Nahyan.
Prime Minister Narendra Modi, who personally received the Prince at the airport, stated that United Arab Emirates (UAE) is India’s valued partner and close ties between the two countries are important for the entire region. Though Republic Day is celebrated on January 26 with the Parade on Rajpath, the celebrations are spread over three days and end with the Beating Retreat ceremony on January 29.
Source- All India Radio (AIR News)
×