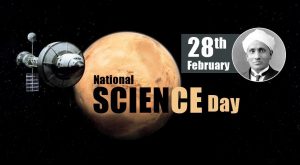 National Science Day is celebrated all over India on 28th February. On this day, Sir CV Raman had announced the discovery of the Raman Effect for which he was awarded the Nobel Prize in 1930. The government of India designated 28 February as National Science Day (NSD) in 1986.

Who was CV Raman?

Dr CV Raman was a renowned scientist who had a bachelors’ and masters’ in Physics from the Presidency College in Madras. He took part in numerous science competitions along with the government job. Afterwards, he received a scholarship from the Indian government.