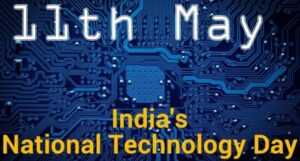 National Technology Day is observed every year on 11th of May in India, acting as a reminder of the anniversary of Shakti. Shakti is the Pokhran nuclear test which was held on the 11th of May, 1998.

The first nuclear test Pokhran with a codenamed as ‘Smiling Buddha’ was carried out in May 1974. The second test conducted was Pokhran II which was a series of five tests of nuclear bomb explosions, administered by India at the Pokhran Test Range of Indian Army in May 1998.