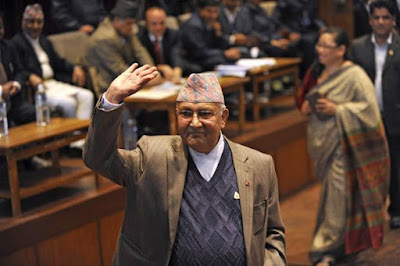 Nepal’s 38th Prime Minister Khadga Prasad Sharma Oli has resigned post the no-confidence motion against him in the Parliament. Oli, who became PM last October heading Nepal’s eighth government in the past 10 years, has been facing a no-trust motion after the Maoists withdrew support from the coalition government. After responding to the no-confidence motion, Prime Minister Oli told the House he already tendered resignation to the President.
Oli began his political career in 1966. He joined the Communist Party of Nepal in February 1970. He became involved in subversive politics in opposition to the party-less Panchayat System in place at the time. For his activities, he was arrested for the first time in 1970. A year later he became the District committee member of party and soon the Chief of the Jhapa Movement Organizing Committee in 1972