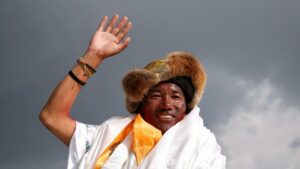 Nepalese Sherpa climber Kami Rita has scaled Mount Everest for a 23rd time, breaking his own record for the most successful ascents of the world’s highest peak. He first scaled Everest in 1994.

He reached the 8,850-metre (29,035-feet) summit with other climbers via the Southeast Ridge route. He has also scaled several other peaks that are among the world’s highest, including K-2, Cho-Oyu, Manaslu, and Lhotse.