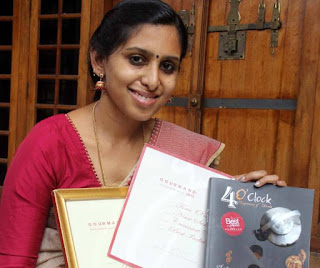 Nimi Sunilkumar, cookbook author and food blogger, has presented this repository of snacks to the world, and been rewarded with a Gourmand World Cookbook Award for 2015-16. Her book 4 o’clock Temptations of Kerala has been chosen for the award in the ‘Best Indian Cuisine Cookbook’ section. The book emerged a winner, competing with entries on Indian cuisine from around the world. The award was presented in Yantai, China, recently.
Nimi Sunilkumar is a cookbook author, food blogger ,food photographer, culinary demonstrator, freelance writer, teacher at Tata High Range School, Munnar. She had started her food blog ‘Nimi’s Culinary Ventures’ in 2009. She began offering ‘Lip-smacking cooking classes,’ on traditional Kerala cooking to tourists in 2012. She has taught traditional Kerala cooking to her students from US, Australia, and UK.