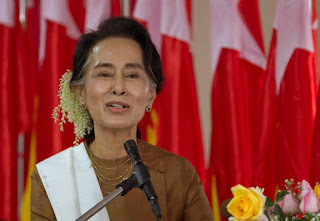 The Harvard Foundation named Nobel laureate and Myanmar leader Aung San Suu Kyi its 2016 Humanitarian of the Year, while students from the Harvard Islamic Society stood outside to protest what they consider her silence toward the country’s persecuted Muslim minority.
Suu Kyi, elected head of Myanmar’s government in April, was placed under house arrest in 1989 for protesting against the country’s dictatorship and served 15 years in detention.

So let’s discuss some questions related to this post:
1. Name the person, who has been  honored as the 2016 humanitarian of the year?