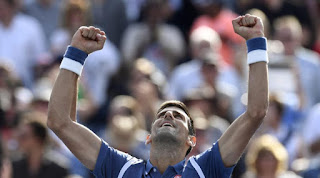 World number one Novak Djokovic defeated Japan’s Kei Nishikori in the final of the Rogers Cup in Toronto. Djokovic secured a 6-3 7-5 victory against Nishikori. Djokovic, a 12-time grand slam champion, will now turn his focus to the Rio Olympics.
In his first tournament since an upset third-round loss to Sam Querrey on the grass of Wimbledon four weeks ago, Djokovic returned to his winning ways and became the first four-time winner of the Rogers Cup. The 29-year-old Serb seized the opening set in just over 30 minutes, and then had to dig deep during a spirited back and forth in the final stages of the hardcourt match.

So let’s do:
1. Name the person, who has won the fourth Rogers Cup championship?