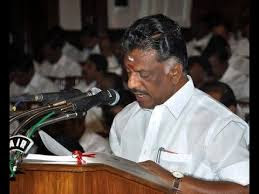 After the demise of AIADMK supremo & Tamil Nadu Chief Minister J Jayalalithaa at the Apollo Hospital, her loyalist O Panneerselvam has been sworn in as Chief Minister at a sombre ceremony at the Raj Bhawan along with all the ministers in the erstwhile Jayalalithaa Cabinet. The AIADMK MLAs met at the party headquarters to elect Mr Panneerselvam as the successor to Jayalalithaa.
At a solemn ceremony in the Raj Bhavan, Mr. Panneerselvam was administered the oath of office and secrecy by Governor C. Vidyasagar Rao. This was his third swearing-in as Chief Minister. All 31 members of the outgoing Ministry were sworn in along with him. As Jayalalithaa’s trusted man, Mr. Panneerselvam had stepped into her shoes for two brief periods — during 2001-02 and 2014-15 — after she was unseated by the courts.
Source- The Hindu