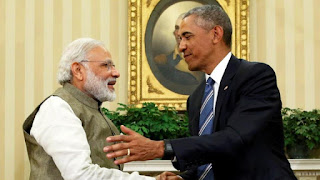 US President Barack Obama has signed into law the USD 618 billion defence budget for 2017, which enhances security cooperation with India and conditions nearly half of the funding to Pakistan on a certification that it is taking demonstrable steps against the Haqqani Network.
Obama has signed the National Defence Authorisation Act (NDAA) 2017, which asks Defence Secretary and Secretary of State to take steps necessary to recognise India as America’s “major defence partner”.
Source- The Hindustan Times