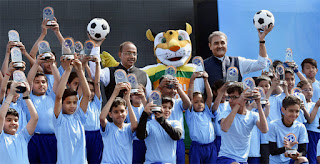 With just 238 days remaining for the start of FIFA Under-17 World Cup India 2017, the official mascot of the tournament ‘Kheleao’ was unveiled at the Jawaharlal Nehru Stadium in New Delhi on 10th February 2017. A clouded leopard called Kheleao was introduced to hundreds of football fans in a ceremony attended by Sports Minister Vijay Goel and All India Football Federation President Praful Patel.
The clouded leopard is an endangered wild cat whose habitat extends from the Himalayan foothills to mainland Southeast Asia. Kheleo will participate in numerous activities in the run-up to the first-ever FIFA tournament to be hosted by India, which will be played from October 06th to 28th this year.
Source- All India Radio (AIR News)