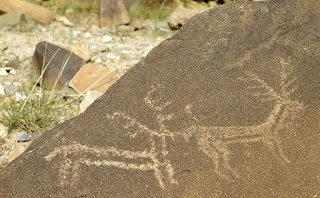 Over 1,000 cliff paintings dating back more than 1,000 years and featuring animals and people have been discovered by archaeologists in northern China. The paintings found in the Inner Mongolia Autonomous Region are believed to have been engraved by the ancient tribal people known as the Tujue, and the Dangxiang, which the modern day Qiang are descended from, about 1,000 to 1,500 years ago.
The paintings are surprisingly well preserved, and feature sheep, camels, elks, tigers, wolves and people hunting. Cultural Relics Bureau of Urad Middle Banner, as saying on August 5. The new findings are among many found across the Yinshan mountain range, and will greatly inform research into ancient nomadic people.