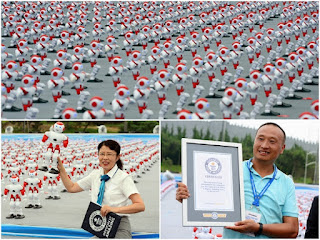 A new Guinness World Record for the most robots dancing simultaneously has been set in China where 1,007 robots shimmied in unison, nearly double the previous record. Each of the 43.8 cm tall dancing machines at the Qingdao Beer Festival were controlled using just one mobile phone and they had to dance for a full minute in order to count towards the record.


A few robots were disqualified because they did not dance or fell over, but the majority of the mechanical dance troupe completed the 60 second routine in perfect unison. The attempt was organised by Qingdao-based Ever Win Company which almost doubled the previous record of 540 dancing robots which was achieved earlier this year by Chinese company UBTECH Robotics Corp.

So let’s do:
1. Name the country, which has been set in China where 1,007 robots shimmied in unison