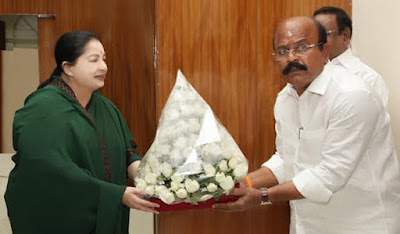 His name was proposed by AIADMK Chief and TN CM J Jayalalithaa and Finance Minister and Leader of the House O Panneerselvam. Newly elected Speaker announced V Jayaraman as the Deputy Speaker as there was no other nomination filed for the post. He was re-elected as the member of Legislative Assembly (MLA) from Avinashi (Reserved) constituency for the sixth term while Jayaraman was re-elected from Pollachi constituency  for the fourth term.
So let’s do:
1. Who is re-elected as Tamil Nadu Legislative Assembly Speaker?
2. Who is the Chief minister of Tamil Nadu?