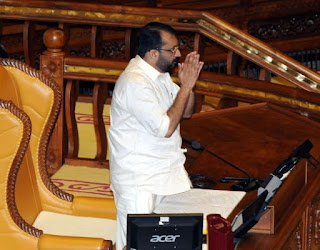 P Sreeramakrishnan of the CPI (M) that leads the Left Democratic Front (LDF) was elected as Speaker of the 14th Kerala Assembly and a two-time legislator from Ponnani constituency.

He polled two additional votes even as the Opposition Congress-led United Democratic Front (UDF) candidate V.P. Sajeendran secured one vote less in a pattern that indicated interesting alignments. Sreeramakrishnan polled 92 votes against 46 of Sajeendran in a House of 140 members with the LDF having a declared strength of 91 against 47 of the Opposition. Earlier, veteran CPI-M leader Pinarayi Vijayan was sworn-in as 12th Chief Minister of Kerala.

So let’s do:
1. Who is the Speaker of Kerala Legislative Assembly ?