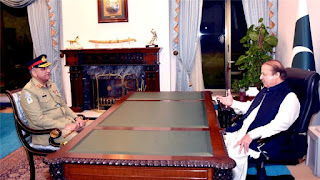 Lt. Gen Qamar Bajwa has been appointed as the chief of Pakistan Army by the Prime Minister Nawaz Sharif. He will replace Gen Raheel Sharif who will retire on November 29, 2016.

Lt Gen Zubair Hayat also appointed as the next chairman of the joint chiefs of staff committee. Bajwa is currently serving at the GHQ as Inspector General of Training and Evaluation. He headed the Pakistan Army’s largest formation Rawalpindi-based X Corps which is responsible for LoC operations. He has served in Congo with the United Nations.

So, let’s discuss some questions related to this post:
Q1. Who has been appointed as the chief of Pakistan Army?
Answer: Lt. Gen Qamar Bajwa