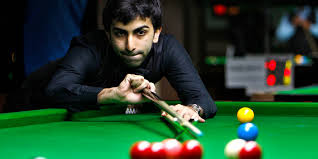 Champion cueist Pankaj Advani has won the Indian National Snooker Championship with a 6-0 win over Pandurangaiah of Railways in a one-sided final on 03rd February 2017.
Apart from clinching his 29th national title overall, Advani broke several other records. He became the only Indian men’s cueist to be the holder of all national billiards and snooker titles at the same time – Billiards, 6-red Snooker and 15-red Snooker. After marching into the finals of the snooker nationals with a 5-2 victory over Sundeep Gulati of New Delhi, Advani put on a flawless show of precision in the summit clash, leaving the spectators at the PYC Hindu Gymkhana mesmerised.
Source- The Firstpost