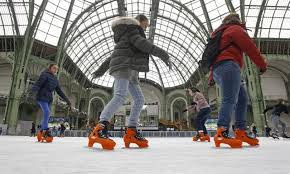 A 2,700-square-meter skating space, which is being considered the world’s largest non-permanent indoor ice rink, recently opened at the Grand Palais in Paris, France. Over 100 workers constructed the ice rink, which will remain open until January 2, 2017. The rink was inaugurated by a show featuring skating stunts and acrobatics as part of the ‘Grand Palais des Glaces’ festival.
Source- The Times of India