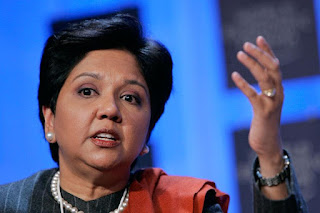 PepsiCo CEO and Chairman Indra Nooyi was ranked 2nd on the list of Fortune’s 51 Most Powerful Women list. The list is topped by Mary Barra, CEO and Chairman of General Motors.
Nooyi was ranked 2nd on the list, same as 2015. In 2014. The list comprises 22 CEOs of major companies and many more corner office contenders across industries. The 2016 list has 9 new comers. The top 5 most powerful women in the list include, Marillyn Hewson of Lockheed Martin at the third place,  Ginni Rometty of IBM (4th),  Abigail Johnson of Fidelity Investments (5th).

So let’s discuss some questions related to this post:
1. Name the PepsiCo CEO and Chairman, who is the only Indian origin woman in Fortune’s 51 Most Powerful Women?
2. Who is the CEO and Chairman of General Motors?
Source – The Hindu