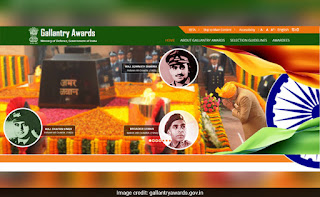 Prime Minister Narendra Modi has launched a website to honour all the gallantry award winners since Independence. The portal will preserve and tell the stories of bravest men and women, civilians as well as armed forces personnel.
In remembrance of heroes who have been awarded gallantry awards since Independence, launched the site http://gallantryawards.gov.in. PM also welcomed citizens’ participation in the process.