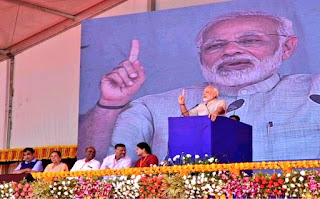 Prime Minister Narendra Modi has laid the foundation stone for Bhadbhut Barrage to be built over Narmada River in Bharuch Gujarat. Mr Modi also flagged off the Antyodaya Express between Udhna in Surat and Jaynagar in Bihar.
Earlier in the day, the Prime Minister has inaugurated a new 500-crore rupees civil hospital and a medical college in Vadnagar, Gujarat. The Prime Minister, in his hometown (Vadnagar), also launched the intensified mission Indradhanush to accelerate progress towards the goal of full immunization coverage.
Must Do Takeaways from the Above News:
Source-Hindustan Times