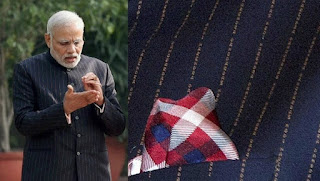 The monogrammed suit worn by Prime Minister Narendra Modi during his meeting with American President Barack Obama last year, which created huge controversy, entered Guinness Book of World Records as ‘the most expensive suit sold’.
The suit was sold at an auction for Rs 4.31 crore. It was bought by Laljibhai Tulsibai Patel, a resident of Surat, in Gujarat, on February 20, 2015. The proceeds from this auction have gone to the Namami Gange Fund, a project to clean the Ganga River.