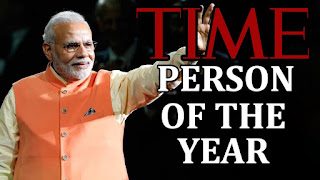 Prime Minister Narendra Modi has won the online reader’s poll for TIME Person of the Year. PM Modi beat other world leaders, artists and politicians, as the most influential figure in 2016. According to TIME Magazine, Modi won with 18 % of the vote when the poll closed. TIME Magazine’s Person Of The Year will be announced on December 7 and is selected by TIME Magazine editors.