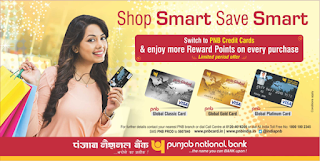 In another digitalisation initiative, Punjab National Bank (PNB) has launched a Contactless Credit Card. This new credit card, which has been named PNB Wave N Pay –Contactless Card, was launched by Usha Ananthasubramanian, Managing Director & Chief Executive Officer, PNB in New Delhi on 21st January 2017.
This card could be used by just waving it across the terminal and the transaction will be through. There is no need to enter any PIN for transactions up to Rs. 2,000.