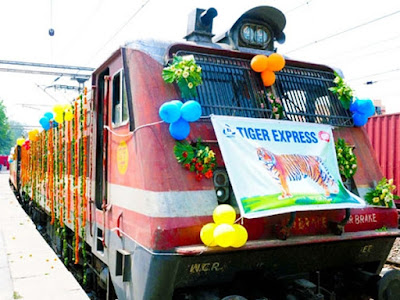 In wake of Budget Announcement 2016-17, Minister of Railways Suresh Prabhakar Prabhu has flagged off the inaugural run of the Tiger Trail Circuit Train from Delhi Safdarjung Station. Prabhu who was on tour to Mumbai, flagged off this train through video conferencing between Mumbai and Delhi.

The launch of this Tiger Express on World Environment Day (June 5) is to highlight the significance of environment in our lives. The Railway Minister took the personal interest in conceptualizing this train. This tourist train will be operated by Indian Railway PSU namely Indian Railway Catering and Tour Corporation (IRCTC).
So let’s do:
1. Expand the term IRCTC ?
2. Who is the Union Railway minister ?