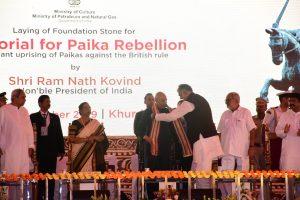 President Ram Nath Kovind laid the foundation stone to the memorial being built in memory of the Paika rebellion, a 200-year-old armed revolt in 1817 against the British East India Company in Odisha. The proposed project will come up at the foothills of Barunei hills in Khurda district, Odisha.

The memorial is seen as an epitome of Odisha’s valour and will serve as an inspiration for the youth. A chair in the name of Buxi Jagabandhu who led this revolt has been established with a Rs 5 crore grant and memorial coin and stamp issued to mark the two hundred years of the event.