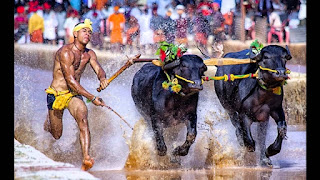 The President gave his assent to the bill passed by Karnataka Assembly to legalise traditional buffalo race ‘Kambala’. In pursuance of the proviso to clause (1) of article 213 of the Constitution of India, the President of India hereby approves the promulgation of ‘The Prevention of Cruelty to Animals (Karnataka Amendment) Ordinance, 2017′ by the Governor of Karnataka.
Bowing to public pressure, a bill to legalise traditional buffalo race ‘Kambala’ and bullock cart races in Karnataka was passed by the state Assembly in February with all parties backing the move. The Prevention of Cruelty to Animals Act, 1960, was amended in its application to Karnataka by the bill which was tabled after the clamour for Kambala grew, spurred by the success of pro-jallikattu (taming of bull) stir in Tamil Nadu.
Important Takeaways from the above News-
Source- News 18

More States in the News is Here