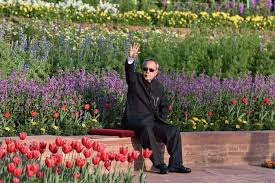 As the Mughal Gardens at Rashtrapati Bhavan has reopened on 05th February 2017, visitors will for the first time see roses named after the Indian President and his wife, growing next to ‘ Abraham Lincoln’, ‘Christian Dior’ and ‘Queen Elizabeth’. ‘President Pranab’, a crossbred variety of rose which was planted last month along with another variety of rose named ‘Suvra Mukherjee’, will blossom in spring. The President’s wife passed away in August 2015.
The entire complex comprising spiritual garden, herbal garden, bonsai garden and musical garden will remain open from February 5-March 12, 2017 (except on Mondays which are maintenance days) between 9.30am to 4.00pm.