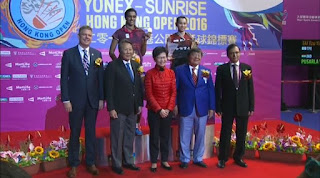 In Badminton, Rio Olympics silver medallist PV Sindhu has lost in the Final of the Hong Kong Open Super Series tournament.
She lost to fourth seed Tai Tzu Ying of Chinese Taipei, in straight games, 15-21, 17-21. This was Ying’s fifth victory over Sindhu. The ace Indian has defeated the Taiwanese thrice in the past.
Source- The Hindustan Times