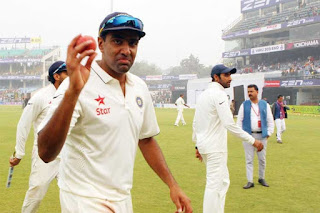 India off-spinner Ravichandran Ashwin has surged to the top of the ICC Player Rankings for Test Bowlers after a superb outing in the first Test against the West Indies in Antigua which the visiting side won by an innings and 92 runs. Ashwin has replaced Pakistan leg-spinner Yasir Shah, who had grabbed the number-one ranking for bowlers only last week with a 10-wicket haul in the opening Test against England at Lord’s.

Ashwin, who was top-ranked in the 2015 year-ending rankings, not only regained the top spot with his second-innings haul of seven for 83 but has also gained in the batsmen’s rankings with a knock of 113 and resultantly strengthened his grip on the top spot among all-rounders.

So let’s do:
1. Name the crickter, who has surged to the top of the ICC Player Rankings for Test Bowlers?