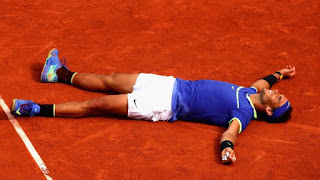 Spain’s Rafael Nadal made history by winning a record 10th French men’s Open title with victory over Stan Wawrinka in the Paris final (French Open 2017). Nadal came through 6-2 6-3 6-1 against the Swiss third seed to claim his 15th major title. He becomes the first man or woman in the Open era to have won a Grand Slam tournament 10 times.
Rafael Nadal won his first French Open title at the age of 19 in 2005. Only Australia’s Margaret Court has more victories at a single Grand Slam tournament, with 11 Australian Open wins between 1960 and 1973. He extended his record at Roland Garros to 79 wins and two losses since his first victory in 2005, the only defeats coming against Robin Soderling in 2009 and Novak Djokovic in 2014.