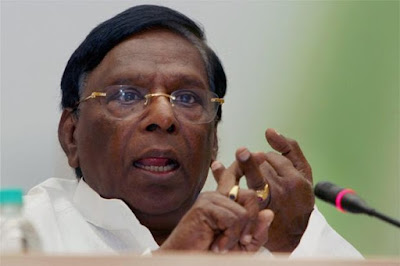 G Ragesh Chandra has been designated as Secretary to Puducherry Chief Minister V Narayanasamy. A release from the Chief Secretary to the government said Lt Governor Kiran Bedi issued an order, stating that the appointment would come into effect immediately. Chandra would hold additional charge of the departments and subjects already looked after by him.

Last year Ragesh was in news the Anti-corruption wing of CBI has filed a charge sheet in the Special CBI Court (headed by Principal Sessions Judge)  against him along with at least 11 others in a case of  land scam involving the sale of a  government land at Pillyarkuppam  in Bahour Commune   by  a private party in connivance with certain  government officials of the administration.

So let’s do:
1. Who is appointed as Secretary to Puducherry Chief Minister?