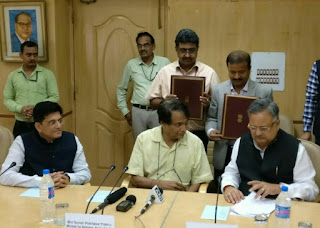 The Ministry of Railways has signed an agreement with the Chhattisgarh government for formation of a joint venture (JV) company for focussed resource mobilisation, implementation and monitoring of critical rail projects. The agreement was signed in the presence of Railway Minister Suresh Prabhu and Chief Minister Raman Singh.
Mr. S. C. Jain, Executive Director (Works) signed the agreement on behalf of the Railways Ministry while Mr. Subodh Kumar Singh, Secretary, Department of Commerce & Industry, Chhattisgarh and Secretary to Chief Minister signed for the State. Chhattisgarh has become the third state to sign JV Agreement with the Ministry after Odisha and Haryana. The JV company will have 51% share from Government of Chhattisgarh and 49% from Ministry of Railways and will work in identifying projects which may be taken up in Chhattisgarh. The company will have its headquarters at Raipur or Naya Raipur.

So let’s do:
1. Name the state, which has signed an agreement for formation of a joint venture (JV) company?